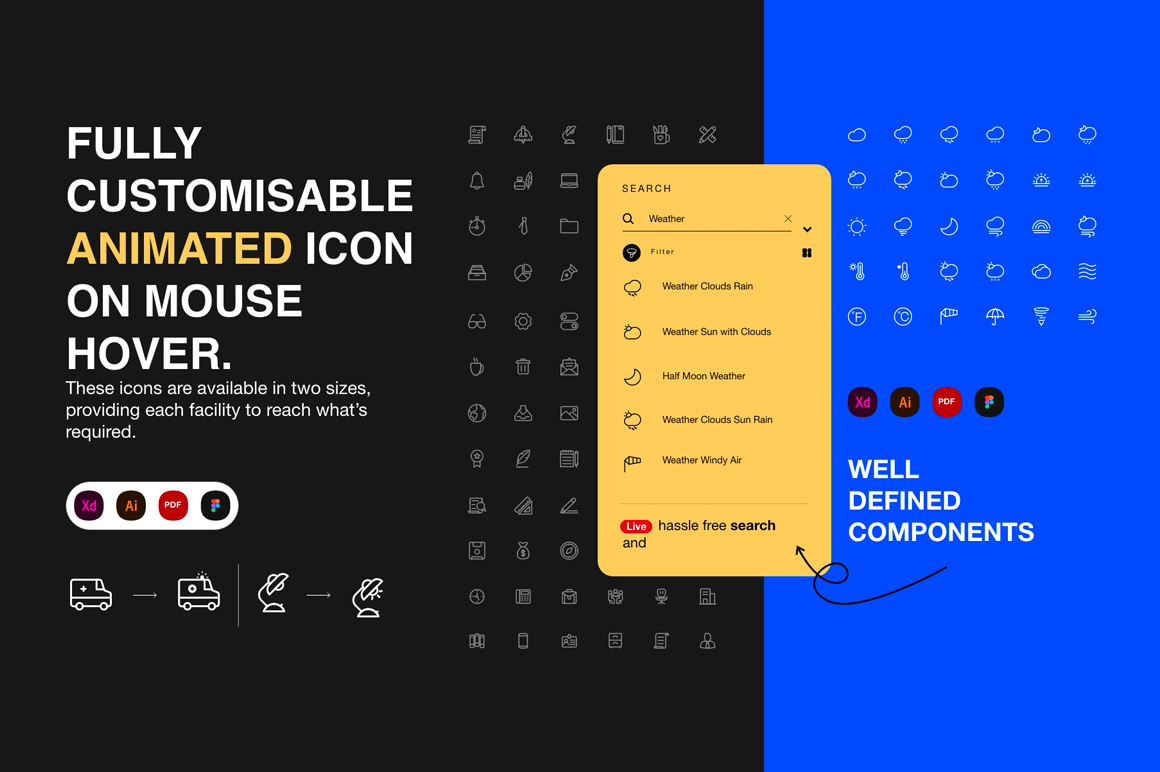 These icons are available in two sizes, providing each facility to reach what’s required.

These icons are easy to use, offering a drag and drop feature for all the icons that are too straight from the search bar.

All the icons are saved with their names so you can easily search for each icon of your choice.

HOW TO OPEN THE ICONS:

There are two options:

CSS animations and transitions can help you personalize your site and provide your users with enjoyable experiences. When a website visitor hovers over an animated element, such as a link or button, it can change color, grow, shrink, rotate, and do other things, depending on how it was coded. This is pleasurable for the visitor and demonstrates that your site is functional.

Thanks to CSS, front-end developers may now create animations and transitions without using JavaScript or Flash. As a result, developing this interactivity is both more accessible and less expensive than before.

CSS animation and transition attributes can both be provided using pseudo-classes, which describe an element’s particular state. Only at that point can the element transition from one style to another. Pseudo-classes include the following:

Of the pseudo-classes above, :hover is the most common.

In this tutorial, we’ll go over everything you need to know about creating an animation or transition on hover and some samples you can use on your own website.
What exactly is a CSS hover animation?

When a user hovers over an element in CSS, the part responds with motion or another transition effect. It is used to emphasize essential items on a web page and is a practical approach to increasing your site’s interaction.

Consider the following example. Hovering over the div causes it to transform from light pink to dark pink gradually.

This appears to be an animation, but it is actually a transition. Although the terms are frequently used interchangeably, animations and transitions are distinct.

Transitions allow you to change the behavior and appearance of an element — but only when a trigger, such as a user hovering over the element, is present. Transitions can only move from an initial to a final state once they are initiated. There are no intermediary locations, and the transition can only run once.

Keyframes, on the other hand, allow animations to loop, repeat backward, and go from a starting state to an intermediate state to an end state.

Keyframes represent the beginning and conclusion of animation and any intermediate stages in between. In other words, each keyframe specifies how the animated element should appear at a specific point in the animation sequence.

Let’s have a look at an example of a bounce animation below.

When a user hovers over an element on your website, you may employ a bounce effect to catch their attention. You only need to define a few animation attributes and keyframes. We’ll go over how to make an animation step by step later in this post; for now, we’ll simply go over this example briefly.

I’ll put the div within a flex container in the following example. As a result, it will only bounce within the defined container area and will not overlap with the heading or paragraph.
The animation will then be programmed to finish its bounce in two seconds and run indefinitely (as long as the user continues to hover over the div). I’ll also adjust the time so that the animation starts slowly, speeds up, and then slows down.

You may have observed that using the transition property would not allow you to create a bounce effect. This is because you can only specify the transitional element’s beginning and final states — not an intermediate point. You could tell it to travel up the Y-axis, but you couldn’t tell it to move back down the Y-axis to complete the bounce.

Now that we’ve better understood CSS hover animations and transitions, let’s look at why you’d want to invest time and money in making them.

Using the:hover pseudo-class in CSS has a number of possible advantages.

You can use it to notify your visitors about crucial facts. Many websites, for example, use a hover effect to distinguish their links from other text on their site.

Some websites also employ the hover effect, which causes additional information to surface only when the user hovers over an element. Otherwise, it will be concealed. This is ideal for including tooltip suggestions on your site, which can help novices but upset advanced users. Sasha Tran, a developer, has provided an example.

You may also use the hover effect to entice users to execute a specific action on your website. Making a button larger when a user hovers over it, for example, can help persuade them to submit the form, make the purchase, or perform whatever call-to-action the button specifies. It can also persuade consumers to click on non-button components, such as social media symbols.

As a result, you should ensure that your content is viewable on all devices, including those with restricted or non-existent hovering capabilities. That is, you can still develop and employ hover animations on your site, but they should not be critical to the meaning of the content or the user experience.

How to Create a CSS Hover Animation

Here’s how to set up a CSS hover animation on an element:

1. Set up the animation property.

Use the animation property or its sub-properties to style the element.

The animation property consists of the following sub-properties:

This is the length of time for one animation cycle. It may be set in seconds (s) or milliseconds (ms) (e.g., animation-duration: 3s;).